Authenticity, Musical Celebrities, Philanthropists, Entrepreneurial Icons, and Veterans of Distinction to showcase the afternoon of July 31, 2022, from 1 pm -5 pm, at The Leaders AMPED for Change Experience held at The Cambria Arundel Hotel and Conference Center, located 7700 Milestone Parkway, Hanover, MD.

Host, Dr. Andrea Adams-Miller, International Publicist, of TheREDCarpetConnection.com, and her peers, hereby present an afternoon of excitement, energy, and engagement to benefit three recipients made up of two nonprofits, the Back Home Patriots and The Keep Smiling Movement, and Ted Blickwedel, VA Whistleblower, with his Go Fund Me campaign.

There is an option to make a monetary donation with registration.

If guests are unable to attend and desire to make a donation, deposit funds at www.PayPal.me/KeepSmilingMovement.

Arrive promptly at 1 pm ready to experience the connections that transform lives for the better. 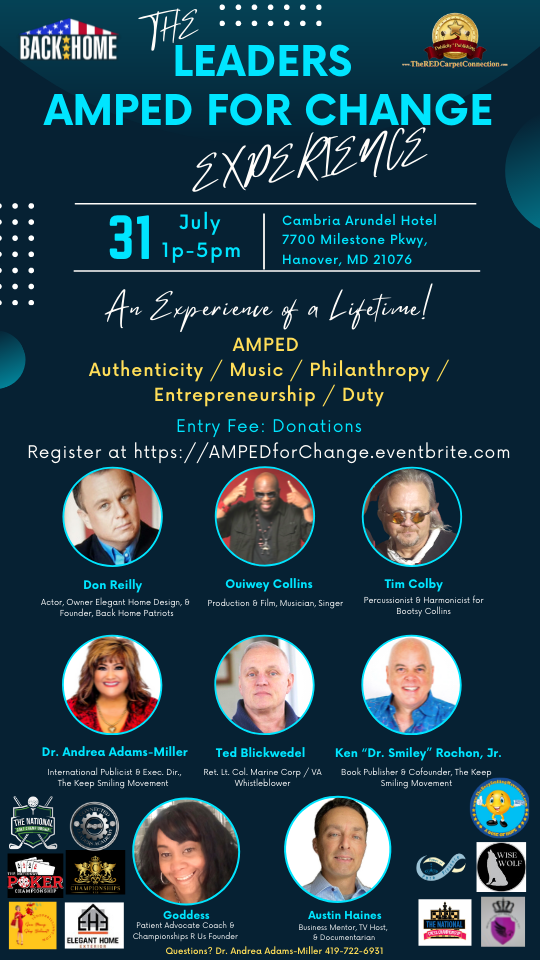 With an ode to duty, the event will feature Honorable Veterans: Ted Blickwedel - Veteran Administration Whistleblower, Licensed Clinical Social Worker, and a retired Lieutenant Colonel in the Marine Corps who is a combat and disabled veteran.

He will share his crusade to restore the Veterans Administration Vet Center's broken promise to provide quality care for veterans. The VA's mandate focused on quantity versus the quality of care for vets dramatically increased counselor workloads at the expense of veterans' mental health care, including those with PTSD.

Becoming a whistleblower, Blickwedel experienced retaliation, including gaslighting, isolation, mobbing, and false accusations. His underlying dedication to protecting quality care for veterans has led to Congressional legislation holding the VA leadership accountable to ensure this injustice does not continue.

He is working closely with Senator Reed and Congressman Cicilline's staff in RI and Washington, DC, to pass legislation protecting Veteran mental health.

He has invested in this cause out of his account. Therefore, there will be assistance given to him in recouping funds to put this change into legislation.

GODDESS is a U.S. Marine Corps Combat Veteran originally from Detroit. She's extremely dedicated to working with charities to serve the needs of homeless veterans and veterans with PTSD.

Due to the death of her only child, KJ, to medical malpractice, GODDESS became America's #1 Patient Advocate Coach. She's passionate about teaching Americans how to advocate for their sick and elderly loved ones. In 2021, GODDESS founded National Patient Rights Week to teach Americans their patient rights. She's the author of The Dumb Patient, How to Avoid Death by Doctor and The Dumb Patient Meets COVID. The Dumb Patient also made the Army's Patient Safety Reading List.

GODDESS is a mentor, public speaker, and ballroom dancer who enjoys the ocean and traveling as much as possible. One of her daily missions is to protect children and to remind women that they are all beautiful.

Distinguished guests will also enjoy hearing from musical talent in the entertainment industry.

Ouiwey Collins, musician and film and music producer, and son of the legendary bassist and 2x Hall of Famer Bootsy Collins, son of legendary multi-Grammy-winning musician Bootsy Collins, has an unmistakable creative ability to bring "edge" and "flare" to anything he touches. His exemplary skill set has been expounded through collaborative projects with his father, Bootsy Collins. A roster of icons Ouiwey Collins has joined forces with a range from George Clinton, Parliament, Billy Ray Cyrus, D.O.C., DPB, Snoop Dogg, Club Nouveau, The Machine Pro., D- Cat Music, Howard Hewitt, The Jimmy Hendrix Family Album, Zapp, Midnight Star, Shirley Murdock, Kocaine, The Dogg Pound, The Jacksons, Lady Miss Kier, and many others.

In 2006 Ouiwey partnered up with David Brooks (DPB) to work with a youth event known as the Basement. Over a 3-year time frame, Ouiwey mentored, trained, and supported staff in the aspects of media and music with a concentration in video production, music production, web design, and graphic design. He also produced a reality show which aired on CW in Ohio. Following the Basement project, Ouiwey toured Japan for three years performing LIVE 6 nights a week with his band Funk Squad.

After completing his tour, he returned to the US to travel with his father on tour from 2011-2015. In 2016 Ouiwey Collins shifted his focus to work on his album and resume working with his band. Ouiwey is currently in the process of working on his album and a Reality Show that will feature Patricia Collins, Bootsy Collins, and Ouiwey. This show is currently in the final stages of the contract phase. The designated film crew will follow Ouiwey Collins and the Funk Squad on their journey. Also, Ouiwey and his father have a wine that will also be coming out soon.

Tim Colby, a well-known percussionist & harmonicist and established band member of Bootsy Collins Band, recently announced that he is revealing a song at The Leaders AMPED for Change Experience that was written in remembrance of 9/11. That song will be presented at the Pentagon on 9/11, 2022, at a 9/11 Memorial Event. This seasoned percussionist and harmonicist plays in the multiple Grammy Winning Bootsy Collins band as he has for 40+ years.

This 100% disabled veteran excels in helping to produce, shoot video, shoot still shots, and set up studios for Worldwide Funk, The Power of The One, The Band Lettuce, and music videos with Bootsy and Bruno Mars, Silk Sonic, Kingfish, Clive Farrington, Big Rob, Ouiwey Collins, Brady Seals, Clay Walker, and Naked Karate Girls to name a few. He also is a production assistant for concerts and appearances, as well as the management of music projects, musicians, and bands.

Since giving back is a priority for successful, positive change, dedicated philanthropists will engage the audience.

Don Reilly- Actor, founder of Back Home Patriots & CEO of Elegant Home Designs will be emceeing. His organization, Back Home Patriots, a nonprofit, renovates homes for veterans needing a hand-up. A 20-year home improvement professional and owner of Elegant Home Exterior, Don's personal, comfortable, good-guy style will appeal to people who desire honest opinions. He's like talking to a neighbor who knows how to make major impactful things happen and has the tools and skillset to do it.

Don produced "X On TV," a series on Ch. 64, where he interviewed people in entertainment throughout the Greater Cincinnati area. He produced, hosted, and televised a television reality show, Back Home renovating homes for Veterans. Collins has also appeared in films such as The Public, To Catch a Fish, and Artworks. He is currently working on a television show with Patti Collins that will be revealed later this fall.

Dr. Andrea Adams-Miller – Organizer of the event, is an international publicist and sponsorship acquisitionist as CEO of The RED Carpet Connection and executive director of The Keep Smiling Movement, a nonprofit.

Dr. Andrea Adams-Miller, The Dream Maker, is an International Award-Winning Publicist & Sponsorship Acquisitionist who manifests dreams bigger than ever dared to dream possible. Just imagine how life is positively affected when the right message, services, and products are known to the world.

A whirlwind of energy, she has shared the stage with outstanding leaders like Anthony Hopkins, Jack Canfield, Stedman Graham, Les Brown, Sharon Lechter, Brian Tracy, and more. She's appeared on 20/20, CNN, E! News, and more. She has the authority, credibility, & connections to put her clients in the limelight, create JVs, set up partnerships & acquire funding.

Also, she is the executive director of The Keep Smiling Movement, a nonprofit mental and dental health organization saving lives with a smile creating a DOSE of HOPE to be resilient no matter the challenge. She will be sharing important updates on how hope and a smile change the impact of the future.

Dr. Ken Rochon, aka Dr. Smiley, the co-founder of The Keep Smiling Movement, will be sharing how to increase smiles per hour (SPH).

Ken is a renaissance man, humanitarian, and an accomplished serial entrepreneur, who established his successes with The Umbrella Syndicate, Perfect Publishing, & Absolute Entertainment. He is a Social Proof Celebrity Event Photographer, International Keynote Speaker, and Published Author of 30+ books. He is the Co-Founder of the nonprofit organization "The Keep Smiling Movement," a radio host on Voice America Influencer Channel, and has been honored as "America's Most Influential Business Connector" and "Entrepreneur of the Year."

Ken focuses on supporting and promoting great leaders, authors, and speakers. He helps businesses grow using "Amplification" strategies in their event and product campaigns. He has exceeded one thousand (1000) 5-star reviews making him one of the most recommended businesses worldwide.

Since business is a staple of our economy, the following influential entrepreneurs will share tips for positive change.

Austin Haines, Flashpoint documentarian and Power of Pure Presence TV host, will enlighten the audience on achieving a flashpoint moment.

Austin is the author of the Amazon Best-selling book Flashpoint a Turnaround Story Starts Here. As a Flashpoint Master Facilitator, Austin guides experiences with Flashpoint. Austin became an Award-Winning Speaker, Trainer, Podcast Host, and Coach. He reaches his audiences wherever they are on their growth path and engages them on a life journey to propel them towards their Flashpoint.

Austin's Flashpoint occurred after he struggled for many years living an unfulfilled life—a seemingly endless climb to reach nothing but dead ends and defeat. He carried the burdens of low self-esteem, feeling branded by the scars from his broken childhood. Later in life, a significant tragedy, tumultuous relationships, financial ruin, and the threat of addiction created a hurricane of hopelessness, dragging him into a dark space and time where he felt his life was over.

Things started to change through the support of his family, mentors, self-education, and spiritual beliefs. Austin landed a promising new job, but within a year, he was told he would be fired if he did not turn things around, the genesis of Flashpoint. During this time, Austin created a significant breakthrough that propelled him to become a top producer during a 19-year career with the same company.

Most recently, Austin resigned from his career and reinvented his life to become a full-time Life & Business Coach, Author, and Speaker. His Flashpoint set him on a mission to reach out and pave a path to reinvent life and journey, allowing emergence into a purpose-filled future a little easier and faster. He just started a new television show called the Power of Pure Presence.

For more information about The Leaders AMPED for Change, contact the company here:

Get Dandy And Remove Bad Reviews From Google

Dentist in Woden Stresses the Importance of the Regular Dental Checkups

Meet Positives.Com Is Promoting Getting Tested For An STD By Ordering An At Home Test Kit

Why TONY'S LOCKSMITH INC - West Palm Beach, FL is Tipping the Scales as the Best Locksmith in the Area

Daddies Donuts and Delites is The Go-to Shop for Delicious and Fresh Donuts in St. Petersburg, FL

When Looking for a Plumber for Property Managers, North Texas Plumbing Can Help