New York City domestic violence divorce lawyer Ryan Besinque releases a new article (https://www.besinquelaw.com/domestic-violence-divorce-attorney/) that explains the grounds for divorce according to New York courts. According to statistics, domestic violence affects about a third of women and around a fourth of men. This is currently the unfortunate reality in the USA.

"Emotional abuse, including verbal threats, degrading remarks, or controlling behavior, is even more common. If you are considering filing for divorce from an abusive spouse, it is critical to get help," says the New York City domestic violence divorce lawyer. 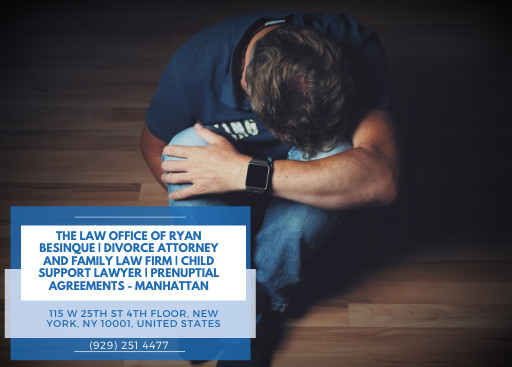 According to the lawyer, divorcing an abusive spouse can be a dangerous process and could lead to unique problems. New York courts are very sensitive to domestic violence. Before divorcing an abusive partner, it is strongly advised that they seek shelter and legal protection.

Attorney Ryan Besinque says victims can seek shelter when they are in danger. The victim will then need to apply for protection orders. A protection order provides legal security for the victim and allows them to seek a permanent solution to their case.

In the article, the lawyer mentions that an order of protection can also be called either a restraining order or protective order. These orders can be issued either by a civil court or a criminal court. A protection order can be used to prohibit contact between spouses or their children. Violations of this order can lead to severe consequences.

Lastly, the lawyer emphasizes the importance of seeking the guidance of a skilled domestic violence divorce lawyer. Having an experienced lawyer may be able to help the client ensure that all measures will be taken in order to protect them while they remove themselves from an abusive situation.

About The Law Office Of Ryan Besinque

Ryan Besinque, Esq. is an experienced domestic violence divorce lawyer. He has witnessed firsthand the financial and emotional toll divorce and separation can take on families during his years of practice, especially for those in an abusive situation. He tailors his approach to ensure that each client is fully represented and feels optimistic about the future. Contact them today at (929) 251-4477 to schedule an appointment.

For more information about The Law Office of Ryan Besinque | Divorce Attorney and Family Law Firm, contact the company here:

The BAM Companies Appears on the Inc. 5000 List for the Fifth Consecutive Year

Kennected Makes Inc. 5000 List For Two Years In A Row

Simpsons Releases Update to Checklist on Moving to New Zealand