Florida divorce lawyer Russell Knight (https://divorceattorneynaplesfl.com/the-florida-divorce-court-process-from-start-to-finish/) releases a new article explaining the Florida divorce court process. The lawyer mentions that married people can get divorced and unwind their relationship as to both their assets, debts, alimony and if there are children, support, and issues relating to parenting time. 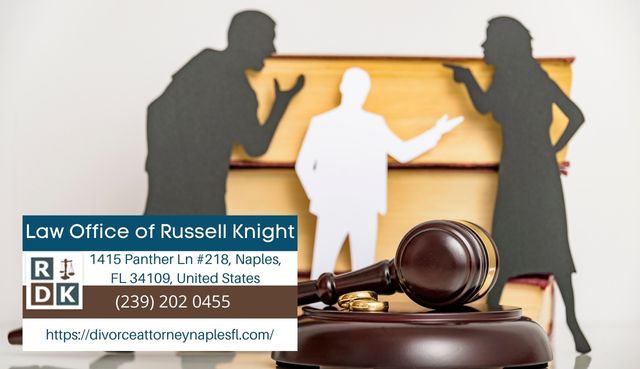 The lawyer explains that it is only possible to file a family law case in Florida if the couple has lived in the state for at least 6 months. If the couple traveled outside the state for vacation or business, they will still be deemed to be living in Florida for that period of time. Matters surrounding children are handled in the county where the child resided for the last six months.

In Florida, the two parties in a family law matter are referred to as the petitioner and the respondent. This helps eliminate the negative context of describing the person who doesn’t file as the defendant. Once the case is filed, the respondent must be served or they may file their own appearance in the case.

Lastly, the Florida divorce lawyer stresses that it is important to consult an experienced attorney when dealing with matters such as a divorce or an annulment. A skilled attorney might be able to help clients understand their rights and responsibilities during the divorce or separation process.

The Law Office of Russell D. Knight was established in 2009 by the divorce attorney Russell D. Knight. The lawyer’s love for family law is demonstrated by the numerous articles personally written by the lawyer. Russell is a licensed lawyer throughout Florida and Illinois. The attorney has a legal practice in both states and employs an entire staff of paralegals and attorneys in the two states of Chicago, Illinois, and Naples, Florida. Contact them today at (239) 202-0455.

Ray of Sunshine Senior Care Denton Earns Agency Recognition in Denton, TX, for The Third Year in a Row

Greenix Pest Control Urges The Locals In Carmel, Indiana, To Get Pest Control Services As The Spring Approaches To Avoid Unwanted Guests