Bronx child custody lawyer Juan Luciano releases a new article (https://divorcelawfirmnyc.com/5-things-not-to-do-during-a-child-custody-case/) explaining the five things a parent should not do during a child custody case. The lawyer says that there are often many negative emotions surrounding both parents. However, when it comes to child custody cases it’s usually not about the marital partners but the child’s best interests.

“Divorce courts hold the partners to different standards when it comes to the welfare of the children, so any animosity that spouses have toward one another must keep children separate from the discord,” says the Bronx child custody lawyer. 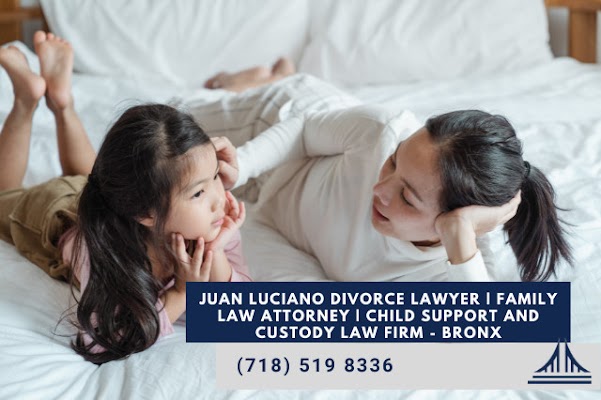 The lawyer explains that one thing a parent must not do is refuse to cooperate. No matter how the parents feel towards each other, their ability to collaborate is something the court will look at in a child custody case. Refusal to cooperate or communicate reasonably will give the court reason to put a pause on the case.

Attorney Juan Luciano adds that it’s also important to avoid confrontations and verbal altercations with the co-parent in the presence of the children. The court will look more favorably on the parent who is more able to take the high road toward the other co-parent.

In the article, attorney Luciano discusses that a parent must never neglect support payments and other parental responsibilities towards their children. Abiding by the orders in the interest of the children will be more favorable in the eyes of the court. Being responsible and concerned about the child’s wellbeing is something the court will take into consideration when determining custody.

According to the divorce attorney, “Child custody is all about the parent who best exemplifies the best interests of the child. Unfortunately, making poor social choices can work against a parent who is actively pursuing custody of their children and may even be admitted as evidence against them. It is also important to seek legal advice from an experienced lawyer.”

Lastly, attorney Juan Luciano believes that having a skilled attorney in matters such as child custody and divorce makes all the difference. A skilled attorney may be able to help the client receive a more favorable outcome in the divorce case.

Juan Luciano has spent his career in the complex legal world of family law. He has earned a reputation for excellence at the negotiation table as well as when in court. He is also fluent in Spanish. Contact them today at (718) 519-8336 to set up an appointment for a consultation with Bronx family law attorney Juan Luciano.

The BAM Companies Appears on the Inc. 5000 List for the Fifth Consecutive Year

Kennected Makes Inc. 5000 List For Two Years In A Row

Simpsons Releases Update to Checklist on Moving to New Zealand